Collection of Notes on Gun Control

Introduction: The US Outlier
This post is merely an extension of the discussion initiated by Professor Rubin on how not to debate gun control - a discussion that is well worth reading, and one that I have referred to multiple times to try and comprehend a situation that is unique to the US while also sharing certain tragic commonalities with other countries. Much of this post are 'note to self' type remarks for future reference and is a largely unstructured collection of pointers to various articles and personal inferences drawn, which may change as more data becomes available.

The country-independent issues are brought out well in the blog cited in Prof. Rubin's post. That the issue of gun-ownership & deaths also has a US-specific dimension is apparent in this picture presented by a comment on Dr. Rubin's blog.

Note however that Newtown was a specific incident (a 'sample of one', as Dr. Rubin notes), whereas this picture above captures macro-trends. Examine these six time-series based facts published by the Washington Post. Assuming this report is factual, the first graphic reconfirms the existence of a unique US situation shown in  the first scatter plot. We will focus our attention on just the first plot in this post. There are other interesting plots that show:

- Southern US has the highest gun-driven fatality rates, while the Northeast has the lowest, 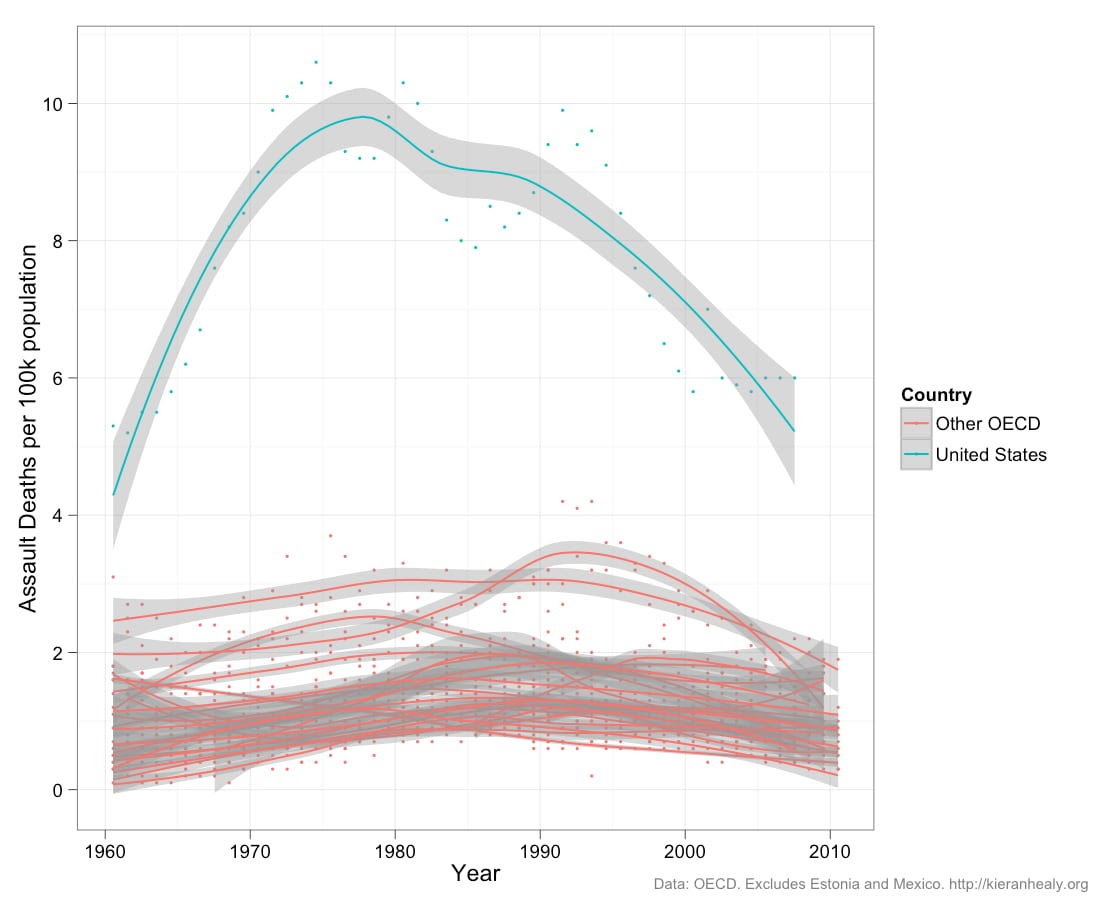 The above graphic reveals that overall gun-related fatality rates in the US have monotonically dropped over the last twenty years. Neither the economic boom of the 1990s or the relative economic decline in the last decade, or demographic shifts, etc. has managed to cause a significant inflection at the macro-level. Does that mean that the violence in the society has dropped overall (reduction in market size), and/or have people found alternatives to guns to express their violence (reduction in market-share)? We may need several other charts to answer that. However, purely based on this time-series, it appears that what we have in place has apparently worked relatively well at a macro-level so far. We may be tempted to think that by maintaining the status-quo we are on course to achieve parity with the rest of the pack with respect to this specific metric, but to predict the future is difficult, and requires some knowledge of causality (or at least correlations that can give us a tiny hint).


Significant Incremental Improvement
To motivate the next discussion, let us recall this very useful comment by Dr. Rubin:
"Many (including, I'm willing to bet, Mr. Cassingham) would consider a reduction in mass shootings, or even a reduction in the body counts, as a significant improvement (satisficing)."

From the point of view of the person who wants to act violently, they may well use the first (or most suitable) 'weaponizable' object they can first lay their hands on, and thus a gun or a knife may well represent alternative optimal solutions to a perpetrator. The time durations for:
a. formation of violent intent
b. searching for optimal method to express intent
c. translating intent into reality
seem to be quite important. These time durations may range from a few milliseconds to years. Mr. Cassingham's blog rightly notes in more than one place (and I paraphrase) 'if not guns, then people will always find something else' (in stage (b). True. Addressing the root cause of violence (that arises in a person's mind, and incubated over varying time durations in stage (a)) is very important to the discussion, so that we never get to see the realization of later stages. Perhaps addressing each of these stages (a-c) in some order of priority may help.

Addressing (a) is likely to reduce the probability of future incidents, and is something that may have to be addressed in from the short-term p.o.v (e.g. using medical science), and all the way to the long term where the world can move beyond mere tolerance for differences to mutual respect that celebrates difference. Addressing (b) can reduce the expected consequence of a violent incident, given that a tragic incident does occur (ideally to zero). Addressing (c) appears to be tied to 'last line of defense' mechanisms in place.

One of the key contributions of Operations Research is to recognize alternative optimal solutions.  Dr. Rubin's idea of 'optimality versus 'satisficing' seems pretty valuable. From the point of view of expected casualties | given an attempt to mass-injure, a smaller gun, a knife or a baseball bat will probabilistically have a lower casualty rate. An explosive device or a WMD-type gun (like that used in Newtown) is likely to kill more per unit time, on average. Thus from the perspective of a group of trapped victims, horrific as it may be, there may exist a reasonably well-defined ranking of what weapons we least prefer to face (obviously 'facing no weapons' would be ideal). It would beneficial if those who already in stage (b) are always forced to switch to a weapon that is far less deadlier than what was available before. We could think of the deadliness of the weapons permitted as a time-variable 'upper bound' on weapons control. There may be a variety of such bounds along each dimension of the weapon and ammunition, as well as lower bounds on re-training frequency, life-event triggers for re-evaluation of permits, etc. Doing so may provide a gradient along which this discussion can take constructive steps toward reaching the most satisfactory solution by iteratively adjusting these bounds. Again, there are likely to be multiple goals having different priorities as already mentioned in Prof. Rubin's post. The presence of constraints may result in 'satisficing' rather than achieving the desired 'global optimality'. One also wonders about the disruptive impact of 3D printing of weapons on such discussions.

What do we do when people have passed through stages (a)-(b), and ready to move to stage (c)? This is the stage, where their intent, as well as degree of planning starts to become visible to others, but the duration may be extremely limited...


Average versus Distribution
The next discussion borrows from a very recent post of another ORMS professor.  Dr. Trick wrote about the tricky issue of averages recently in his post "which average do you want?".  In addition to the amazing and heroic teachers and staff of Sandy Hook Elementary School, Newton, we just lost eighteen of our most precious and littlest citizens in a matter of minutes after near-complete peace and quiet in that area during the previous 364 days. Such sudden, scarcely comprehensible mass murders (low-probability, catastrophic consequence events) suck the oxygen out of a nation's morale compared to an alternative and equal cumulative tragedy that is well spread out over time and space. Dr. John Cook's blog today talks about the nonlinear effect of 'batch size'. In either of these equally tragic scenarios, from every individual victim's family p.o.v, the anguish and price paid over time is likely to be the same - too high to imagine.  Picture 1 of the WaPo article only reveals a reduction in the overall rate, but not the changes in the distribution (victim's age, motive, ..). The nation's response last week leaves little doubt that the distribution of this statistic is just as much if not more important.

Sam Harris notes in his "The Riddle of the gun" :
"... As my friend Steven Pinker demonstrates in his monumental study of human violence, The Better Angels of Our Nature, our perception of danger is easily distorted by rare events. Is gun violence increasing in the United States? No. But it certainly seems to be when one recalls recent atrocities in Newtown and Aurora. In fact, the overall rate of violent crime has fallen by 22 percent in the past decade (and 18 percent in the past five years).
We still have more guns and more gun violence than any other developed country, but the correlation between guns and violence in the United States is far from straightforward...

..... Seventy mass shootings have occurred in the U.S. since 1982, leaving 543 dead. These crimes were horrific, but 564,452 other homicides took place in the U.S. during the same period. Mass shootings scarcely represent 0.1 percent of all murders. When talking about the problem of guns in our society, it is easy to lose sight of the worst violence and to become fixated on symbols of violence ...  "

LPHC Events in the Life cycle of a Gun
Finally, to the gun itself. Like a pair of scissors, a kitchen knife, or a car, a gun is a tool that has associated with it a probability for helping and hurting simultaneously whenever it is is handled. Associated with each of these tools is an expected frequency of usage and a risk profile that is context dependent (such as geographical location). The intended target of the primary benefit is largely limited to self and family (who bear the cost of maintenance), whereas the cascading and probabilistic liability is necessarily borne by self, family, and others. Every additional gun, its type, and associated inventory of ammunition, increases this probabilistic liability to the owner, his/her family, and public in a certain way, while altering the expected probabilistic benefit to self in another way. In many instances, both the benefit as well as the liability of acquiring guns appear to be tied to Low-Probability, High-consequence events. In extremely peaceful places, the expected liability may exceed the expected benefit over the lifetime of the weapon, whereas in lawless places, the opposite may hold true.

Louis L'Amour noted:  "When guns are outlawed, only the outlaws have guns". One of his best books, where violence is almost a living character is 'The Daybreakers" that ultimately ends with a note on the self-realization of the main protagonist leading to his rejection of senseless violence: "We found our home, and we graze and work our acres, and since that day in the street of Mora when I killed Tom Sunday, I have never drawn a gun on any man. Nor will I ...".  King Asoka of India fought and won the bloody battle of Kalinga, but was so shocked by the carnage that he gave up further violent conquests and turned toward meditation and the Dharmic way of life. The multi-millennium old Sanskrit Shloka on Ahimsa (non-harming) in Hindu Philosophy says (ref: Hindupedia):


Translation: Non-harming is the ultimate Dharma (very loosely translated as 'righteous way of life'). Harming in service of Dharma (only) is equally virtuous. Consequently, enduring or ignoring, rather than opposing tyranny is not a virtue. The spirit of the second amendment (arguably) and Asimov's three (plus zeroth) laws of robotics come across as examples of the application of this profound Shloka. Some of Gandhi's more head-scratching ideas are apparently due to his ambivalent treatment of the second line of the Shloka, although the Mahatma did say (ref: http://www.mkgandhi.org)
"I do believe that, where there is only a choice between cowardice and violence, I would advise violence... I would rather have India resort to arms in order to defend her honour than that she should, in a cowardly manner, become or remain a helpless witness to her own dishonor. But I believe that nonviolence is infinitely superior to violence, forgiveness is more manly than punishment"