Sine-Generator in the Aryabhatiya, 1500 years ago

Came across this post by Rajiv Malhotra on facebook, and am posting a screenshot.  More research and findings continue to trickle in about the discoveries and creations of ancient Indian mathematicians, and this sloka (verse) is not an isolated example. The focus of this brief post is on the design of the sloka from the data compression optimization aspect.

Brevity and conciseness was important to ancient Indian scientists and linguists for various reasons. Their success in optimally designing such slokas to be memorized by maximizing the density of information carried per unit syllable, while also (and this is important) ensuring that the sloka is logically sequenced and constructed, and relatively easy to memorize, is utterly remarkable. In particular, the affection for the minimal among those Sanskrit grammarians is legendary. There is an oft-repeated saying in ancient India that the joy experienced by a grammarian who manages to achieve a half-a-syllable reduction is only equaled by their joy upon the birth of their child. The choice of the objective function drives the design approach. In contrast with the previous example, we have the Vedic chants in Sanskrit, the world's oldest, unbroken surviving oral tradition, where redundancy was deliberately added to minimize error in oral transmission (an achievement that may have contributed toward India having the world's oldest, unbroken civilization). In this case, what was memorized and repeated was much, much longer than the original verses in order to optimize information and audio fidelity.


(Mysore is a city in Karnataka, India, whose state language is Kannada)

Update (Sept 5, 2013)
The English transcript of the sloka can be found here in the Nature Journal (thanks to Srikrishna ‏for sharing this link). 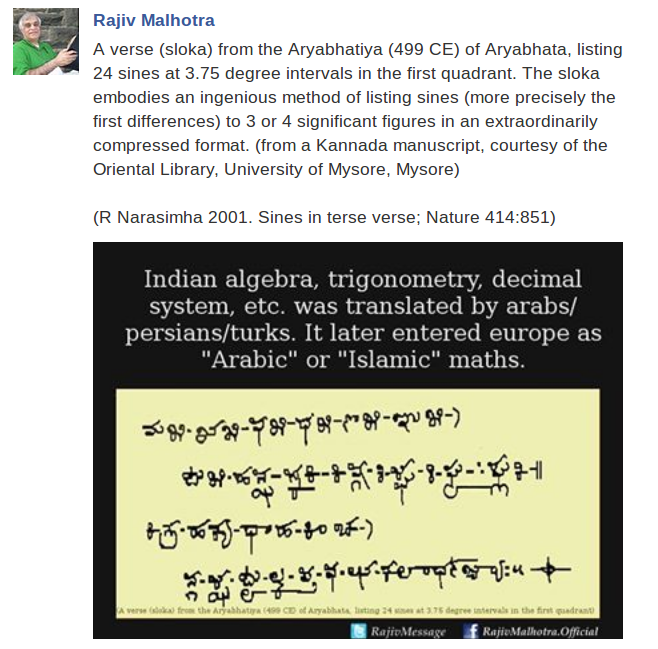 Update 1: December 15, 2013
A superb post at http://hindufocus.wordpress.com on a compressed Sanskrit verse for remembering the value of Pi to 32 decimal places.
"..... Here is an actual sutra of spiritual content, as well as secular mathematical significance.