A quick blog on today's amazing knock by AB.

Here's the archive of Cricinfo's online commentary for the cricket match where South African batsman AB de Villiers scored the fastest ever ODI cricket century. Here are the stats. He batted just 44 balls for his 149 runs that included 16 sixes. Here's a graph of his cumulative strike rate throughout the innings in runs per 100 balls. 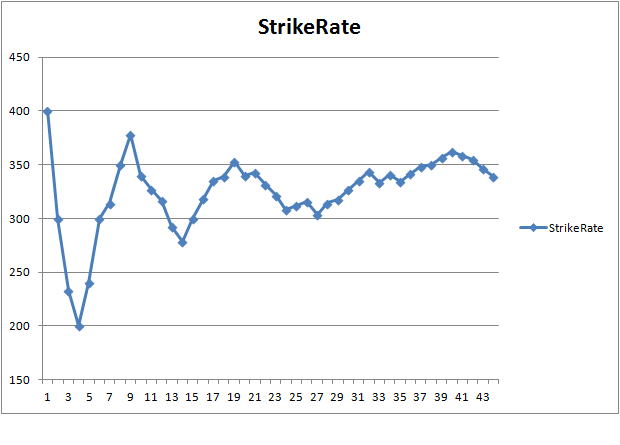 His highest cumulative strike rate was 400 after the first ball, and thereafter, the lowest it ever reached was 200, after 4 balls. His first fifty took 16 balls, and his second fifty was even faster, coming of just 15 deliveries, giving him the record 31-ball century. He scored no runs of the last two balls he faced, causing his final strike rate to dip below 350 and end at 339.

AB was at the crease for just 44 minutes. In comparison, the slowest international hundred (in test cricket, which can be very different) in history consumed 557 minutes.

As far as instantaneous strike rates throughout the innings, we can observe a 13-ball stretch (28th to the 40th ball) where he scored 63 runs to move from 82 to 145, at a strike rate of 485 - suggesting that in that period, like Viv Richards, AB was in two minds - whether to hit the bowler for a 4 or 6.

The previous fastest ODI century consumed 36 balls, which yields a strike rate of less than 300. AB's final strike rate in this innings is higher than the expected book-cricket team strike rate of around 325.