In the last post on cricket, we mentioned that the false positive (F+) issue with the Decision Review System (DRS) employed in international cricket could be a deal-killer (see red zone in picture below). 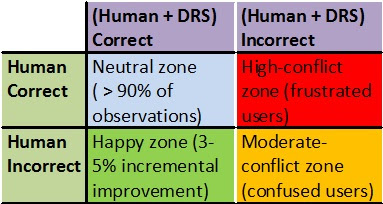 In this post, we work out an illustrative numerical example using a well-known conditional probability model based on reasonable data derived from interviews of ICC personnel to show that the current F+ rate disproportionally reduces the efficacy of the DRS, causing it to operate only marginally more effectively that the human-only (umpire) method, and thus may not be worth the cost of maintenance unless the F+ rate is reduced to a more acceptable level.

For brevity, let's focus on bowler reviews in this example. A bowler will ask for a machine review of an umpire's original decision of not out, hoping to turn that into an 'out'. Umpires in the elite panel are themselves around 90% effective in making the right decision (so on average, only 10% of the subsequent DRS referrals should change the outcome if they work perfectly), so it is really that 10% gap that is the problem.

Today's cricket DRS system is claimed to be around 95% accurate in giving a batsman out, if in fact, the batsman is really out. Suppose the DRS also yields F+ results for just 1% of the bowler reviews, i.e. it gives a batsman 'out' when he is really 'not out' just like the umpire originally said. If 10% of the batsmen subject to bowler reviews are actually out (as obtained in the previous paragraph), what is the probability that a batsman is actually out given that the DRS overturns the umpire's decision to say he is out?

Answer: Let OUT be the event that the batsman reviewed is actually out (its complementary event is NOTOUT), and RED the event that DRS gave him out. The desired probability P(OUT|RED) is obtained using the Bayes formula by:

Observations
1. Even a 1% F+ rate brings down the true efficacy of DRS, and it is not 95% as the ICC claims. The second term is a combination of F+ rate and human accuracy. Thus
P(OUT|UMPIRE SAYS OUT) = 90%
If the bowler asks for DRS review:
P(OUT|DRS SAYS OUT) = 91%
Not much of an improvement


Thus, the tables are turned now and the DRS makes things worse for batsmen here and we may be better off not using DRS at all even if it is provided free of cost!

This second result may seem puzzling. Why does this happen? If the umpires get better, the frequency of true NOTOUT is 1% higher, and with the F+ rate held constant at 1%, there will be an increase in the total number of false positives over a period of time, in addition to a small decrease in count of true positives, thereby reducing the accuracy rate of the DRS.

You can plug in a variety of numbers to see what the corresponding results are. You can also perform a similar analysis for batsman reviews.

Recommendations:
1. Significantly cut down on the F+ rate and not just focus purely on increasing true positive rate

2. Improve the quality of original human decisions. This will reduce the dependence on DRS, encourage improvements in the DRS to keep pace, and obviously improve player attitude toward umpires.

3. If a brilliant cricketing instinct filled person like Mahendra Singh Dhoni talks about 'adulteration of human and machine', do think twice about it, he's got a useful math model behind this statement!

Reference: Introduction to Probability Models by Sheldon M. Ross. This example is a variation of an example from this book. Hope I did not mangle it.
at April 17, 2012