This is the third post in this series on gender-shaping. The previous installment can be found here. Thanks to a twitter link, I came across a 2010 journal paper: "Missing Women: Age and Disease," Siwan Anderson (University of British Columbia) and Debraj Ray (New York University) published in Review of Economic Studies Vol.77.

This paper has among other things, investigated Amartya Sen's '100 Million Missing Women of India' claim that is attributed to systemic discrimination. Anderson and Ray have estimated the number of 'missing women' in India, China and Sub-Sahara Africa by age and cause-of-death (not done before) while also moving away from the simplistic aggregate sex ratios that were used as baselines in prior works. The authors make the following useful observations: Defining missing women by differences in aggregate sex ratios can be misleading, or uninformative (or both). It is misleading because different countries have different fertility and death rates, and (in particular) different age distributions. They will have different disease compositions.
They may also have different sex ratios at birth for genetic or environmental reasons that have nothing to do with missing females.

The procedure is also uninformative: we cannot tell at what ages the missing women are clustered, or what diseases are responsible. Thus, we cannot begin to ask about the various
channels: discrimination, biology, social norms, and so on. Answering these questions is of profound importance. By unpacking missing women by age and disease, our paper takes a limited and preliminary step in this direction."

From an OR perspective, we extensively rely on similar customer segmentation models (in revenue management for e.g), and this additional age- and causal-factor based segmentation appears to be quite important and yields two main results as well as a comparative result that may be interesting to an U.S audience:

1. A large fraction of the missing women in India are not infants (less than 20%) but adults, and is attributable to other factors like disease and injury, apart from any systemic discrimination. Consequently, any claim of exclusively female infanticide driven 'missing women' in India is rejected. On the other hand, this paper finds that 44% of China's missing women are in the prenatal age-group. Here is a snapshot of sex-ratio by age, taken from the Anderson & Ray paper: 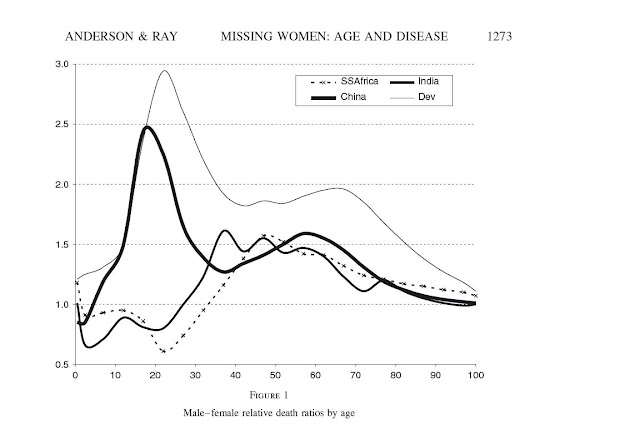 2.The authors make an interesting comparative comparison with the U.S: "we observe some similarities between age-specific percentages of missing women in the historical United States (ca. 1900) and India or sub-Saharan Africa today".

3. The Sen count (100 million missing women) appears to have been calculated with respect to a specific counterfactual: The overall sex ratio for N. America, U.S and Japan. An alternative calculation by Coale (1991) comes up with a more conservative estimate of 60 million. Anderson and Ray perform similar calculations but at the segment level (i.e. by age-disease) and generate missing number estimates using more carefully chosen counterfactuals as the baseline and find approximately 20 million missing women in India (aggregated across all age groups), while the corresponding figure for China is 58 million. Furthermore, 'injury' is not an insignificant culprit in India across all age groups, a potentially worrying trend that its government must look into. (The paper alludes to the old bogey of 'dowry deaths' as a probable cause which may not turn out to be the case. A similar detailed analysis is required).

The findings of this paper also weakens a statement in a previous post on this topic that a skewed overall male:female ratio in a region is a 'scary indicator' of female infanticide being practiced there. My statement ignored the age distribution as well as the 'cause of death' dimension. Bad O.R, but I have Amartya Sen for company.
at March 26, 2012