Bengal Holocaust: The Analytics of Mahalanobis - 3

The Forgotten Holocaust
When the Nazi death camps in Europe were discovered by the allied forces toward the end of WW2, General Eisenhower ensured that many people, including allied troops as well as local civilians got a good look at those concentration camps, and had the evidence documented for posterity. Today, after more than six decades, the belief that the Jewish holocaust actually happened (with a probability of 1.0) is accepted by most of the world. A key step in such situations is to record as much evidence, and obtain multiple and independent verification of events in a scientific and unbiased manner, when the relevant facts still have a fresh time-stamp and eye witnesses are alive and willing to go on the record.

While the Jewish population, and others in Europe were being cleansed from the world of the fictional master-race of Aryans (another byproduct of the discredited Aryan Invasion Theory (AIT), which was initially concocted by a few 19th century German researchers analyzing Sanskrit texts, and later 'weaponized' by the British Raj for empire building), occupied Bengal in India was dying of starvation and disease. Some historians have attributed the deaths of these 3-6 million innocent Bengalis in the 1940s to the British occupation policy - one that was inspired by the very same AIT that the Nazis whom they were fighting, also subscribed to. However, there was neither an Eisenhower nor his resources to allow an exhaustive audio-video-text recording of the facts surrounding this tragedy in Bengal. Millions of innocent Indians were claimed by that holocaust 70 years ago, and much of the world knows very little about it.

Let's look at the data.

The Bengal of Mahalanobis, 1943
The British empire's occupation model ensured the conversion of India from a thriving manufacturing and knowledge hub into an agrarian, subsistence economy. India turned into a supplier of slave-wage labor as well as a market for Britain's finished goods. If this wasn't enough, the empire monopolized the mother-of-all drug running operations whose supply chain originated in Bengal. Bengal's native economy was badly dented when the second world war arrived.

An old map of India (possibly) in the 1940s. Bengal is situated in the eastern part of India. 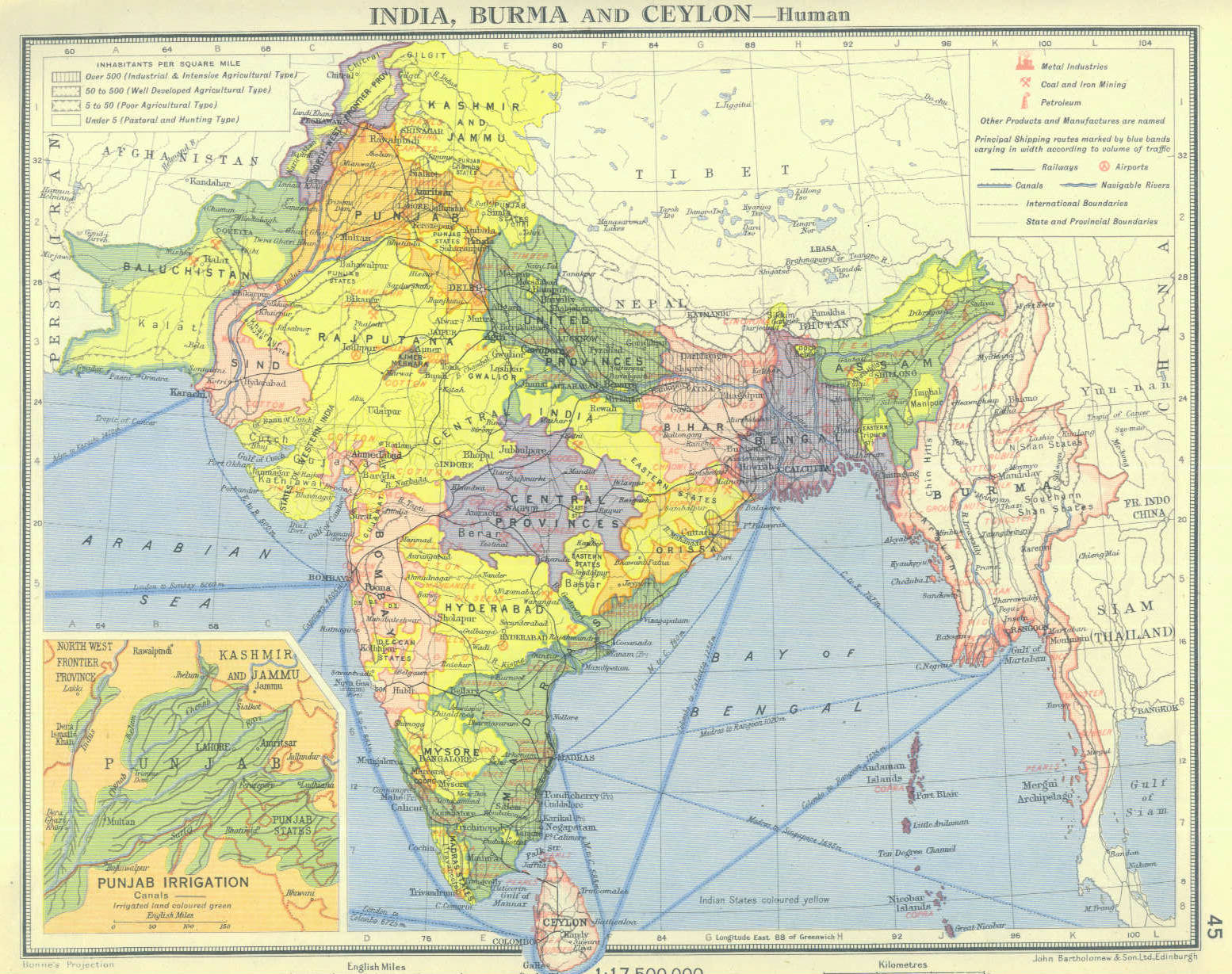 Mahalanobis had just published reports of his pioneering work on optimized random sampling to estimate the Jute crop in Bengal (an effort that ranks among the earliest victories for the field of Operations Research). A reading of his research papers point to a person who was a dispassionate collector of data and details, a stubbornly methodical person (his detailed breakdown of costs incurred during the jute crop sampling optimization project is mind-boggling), and a person who was enthusiastic about, and skilled in the application of analytics to solving real problems.

Mahalanobis was requested by a representative of the occupied people to do something to bring to light the facts surrounding the Bengal holocaust. Thus it transpired that a Operations Researcher / Applied Statistician, and not some military general, was entrusted with the job of recording the facts of the Bengal holocaust that occurred between 1942-1944.

An increasing number of historians today are coming around to the view (including many blogs) that was held by many in Bengal - that this crisis was an inevitable outcome of British Raj policy. Going one step further, Madhushree Mukerjee has painstakingly compiled evidence and data that implicates the British Raj and the one person she felt was most responsible: Winston Churchill, in her recent book "Churchill's Secret War". The evidence is disturbing, and readers can make up their own minds.

The focus of this post is not on Churchill but to try and grasp the estimated scale and dimensions of the tragedy brought to light by the systematic findings of Mahalanobis' randomized survey.

The work of Mahalanobis
Mahalanobis applied for and obtained a grant from the Government after a considerable delay to conduct his analysis. Time was of the essence, and he again employed his cost-effective yet accurate methods based on random sampling (an overview is provided in part-2 of this series) by interviewing families located in different locations within Bengal. Approximately 16, 000 randomly selected families from 386 villages were surveyed between July 1944 and February 1945. Detailed statistics including: loss of life in the family by age and gender, the mortgaging and/or sales, either in part or full, of farm land, as well as the sale of cattle used to plough the land, their profession, economic status, etc. were collected.  Bengal was divided into regions, classified based on the degree to which they affected by the famine. The survey design took this into account and weighted averages were calculated to avoid over- or under-reporting of mortality rates.

Official forecasts of food supply and demand were of pretty poor quality and 'bad guesswork' as mentioned in the prior post, and unreliable. The survey report noted that Bengal was suffering from food inventory deficit well before the crisis of 1943: The net annual import was 100K tons on average, and up to a million and half tons during individual years, during the seven year period between 1933-39, i.e., even before WW2 started, from which point it could have only gotten worse. Data also showed that the pre-1943 rate of land sales was rising in a land where the primary occupation was agriculture and 76% of the family-owned farm land was already at or below the subsistence level. A good proportion of the cattle that was sold was not repurchased by native farmers but by outsiders (possibly for slaughter to supply meat to military personnel). All indicators pointed to an already desperate situation that also left Bengal totally vulnerable to any supply-demand shock, which inevitably arrives sooner or later. In this case, the supply shocks arrived in the form of imperial Japanese troops storming Burma (today's Myanmar), and the apparent failure of rice crop. Demand (and hence price) spikes cannot be ruled out either.

1943 was apocalyptic for Bengal. The Mahalanobis report measured the change in the already terrible economic indicators, as well as the increase in the number of destitutes. These numbers are shocking and point to the total absence of effective government intervention: A 300% increase in economic deterioration and 1200% increase in the rate of destitution (with young women affected the most) during the famine even as Britain appeared to stockpile food for itself. Bengal was a victim of depraved indifference of the worst kind.

Fatalities
The sampling survey attempted to obtain the number of family members who had lost their lives during the food shortage. Mahalanobis estimated a mortality rate of 5.0% for men and 5.6% for women in a estimated 1943 population of around 61 Million (derived from a 1941 census). By design, the survey excluded: infant and toddler deaths, individuals without families, and entire families that either perished or relocated out of Bengal. Mahalanobis was not provided funds to repeat this sample survey ever again, so the fatalities in 1944 could not estimated.

The next step was to establish a counter-factual: what would have been the 'normal' mortality rate had the disaster not taken place? He chose 1931 as the baseline year, since data was available. That rate was 4.0%.  Madhusree's book notes that the normal mortality rate for India then was 2.1%, so Bengal's 1931 rate was already nearly double that number - a stunning statistic. Note that a different counterfactual will give us a different 'missing number' value.

Note: This post does not provide numbers from Amartya Sen's analysis because his numerical results have been shown to be shaky in multiple instances upon further examination (see this old dualnoise post for example, as well as external references 1, and 2).

Some of the reasonable numbers quoted by historians today are derived from Mahalanobis' carefully-designed and controlled sampling study. For example, Madhusree, after correcting for infant deaths, and noting the symmetrical distribution of mortality rates around December 1943, arrived at an estimate of 3 million incremental deaths during 1943-44. The total number of incremental fatalities across the war years is likely to be higher and comes eerily close to the number of Jews murdered in Europe by the Nazis. Also, if the reference counterfactual is taken as India's normal mortality rate (2.1%) to include the abnormal situation in Bengal during those years, this number further shoots up. Birth rates in 1943-44 dropped significantly as well. Based on these calculations, it is plausible that Bengal lost around 10% of its population during the war years.

The random sampling methodology for estimating the supply of jute that earned much revenue for Bengal, and for determining food crop produce that fed it was eventually re-used to estimate the number of Bengalis who died without having anything more left to sell or eat. Mahalanobis' carefully chosen words within his final summation reads:
"... The famine of 1943 was thus not an accident like an earthquake or a flood, but the culmination of economic changes that were going on even in normal times."

Postscript
A remarkable finding about the millions of Indians who were left to starve to death in Bengal: there was no cannibalism anywhere.

Selected References
1. Several Sankhya journal articles of the 1930s-40s that cover the relevant works done in the ISI including:

'An Estimate of the Rural Indebtedness of Bengal', 1934

'Indian Statistical Institute: Numbers and Beyond, 1931–47'

3. http://www.bowbrick.org.uk/Famine%20pages/famine.htm. Also see the 'key documents on the famine' page.

4. The New York Review of Books: "Did Churchill let them starve?", and the resultant exchange with Amartya Sen.