Traveling Salesman Problem in a Portrait?

By sheer coincidence, this brief blog, like the previous one, is related to Asian (Japanese) art, and one i felt 'compelled' to do. Thanks to @SimoneCerbolini for sharing this beautiful portrait on twitter. What is interesting about this art is that it was done, as Simone tweets, using "a single thread wrapped around thousands of nails. Artwork "Mana" by Kumi Yamashita" 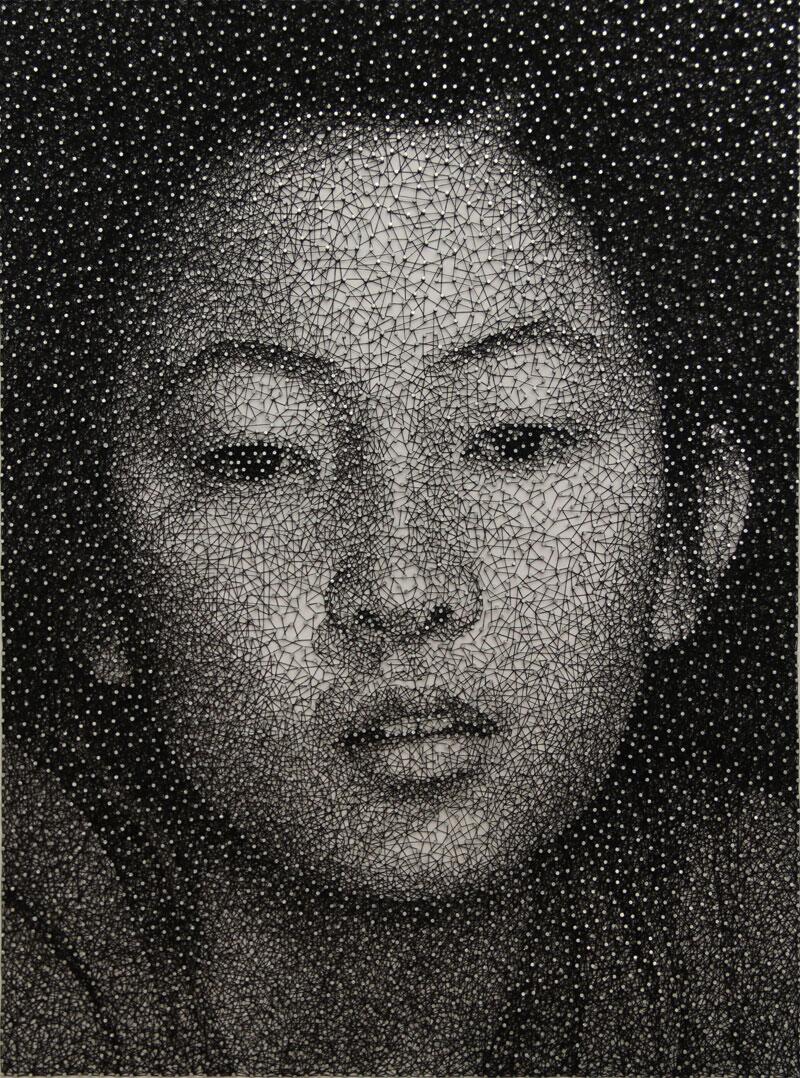 The artist, Kumi Yamashita, has a facebook page, and here is another picture from there.

The effect is stunning, and one marvels at the human 'cognitive shift' that convinces us that within this collection of thread and nails, is a lady. Here is a brilliant talk by neuroscientist V. S. Ramachandran (Director, Center for Brain and Cognition, UC, San Diego) on 'Aesthetic Universals and the Neurology of Hindu Art' that explains this in depth.

From the operations research perspective, we gravitate toward the mathematical problem hidden in this portrait: determining the least length of thread to traverse through all these nails. A mathematical optimization model that can be used to answer this question is the celebrated 'Traveling Salesman Problem' (TSP), which is known to be difficult to solve, in theory. In practice, however, extremely large instances have been solved to provable optimality.

Here is another page that displays a collection of pictures from the artist's 'constellation series'. It also includes this ultra-close up that lets us see how the threading really progresses at the micro-level. Each nail is traversed multiple times, and a greater density of thread is used to create a darker shade (e.g. the eye and the brow). Additionally, there appears to be a greater density of nails in that area. Can a thread-traversal path generated by a TSP solver (e.g. concorde) produce a similar effect to the eye and the brain? I'm not sure, although it may still produce 'a reasonable picture of a lady'. If the density of nails is increased in these areas, then perhaps the TSP-artwork may do a good job. Alternatively, it may be possible to modify the TSP network structure to induce such an effect.